Up bright and early to miss the traffic, and I was heading South... a minor deviation to miss the M6 Toll and then straight line home.

I arrived as everyone else was just getting up

so I had a good opportunity to mend some kit - my mini disc player had failed at the Flowerpot and a quick look showed the power supply had a broken lead - easy to see in the daylight, but not in the half light of a mixing desk.

After a quick lunch and walk for the dog I was back on the road, this time with the girls. A cross country trek is the easiest way to the Railway, and it wasn't long before we were pulling onto the car park, just in time to help with the unloading.

Deja vu, came to mind as we sorted the kit out, except overnight Jay and Lyndon had decided to change sides, being Bijou and compact the stage at the Railway does not lend itself to much moving around, so it does mean that the girls do not have to fight the jostling at stage front from the mosh pit. All the stage cameras were working as fixed, although we did try some interesting angles.

The show was to be the same set as the night before. The girls disappeared into the crowd as the band fought their way onto the stage - at the railway the dressing room is at the opposite end to the stage, which always provides an interesting entrance! - and I was left to look after myself.

Things went without a hitch, and again the new material stood up extremely favorable with the crowd, my favorite new track keeps changing. I guess it wi9ll be some time before I settle on one - if at all

At the intermission, there was a pause for fancy dress prize giving - there were some excellent costumes, but in the end Angie and a fairy (sorry did not get your name) took the prizes.

All too quickly we were at the end again, the only difference was that we did not have to drive anywhere so a few drinks were partaken of .. and some strange dance routines ... Mark - I still think you were impersonating a handbag surrounded by all those ladies

Sleep came easy and provided the recharge for the next day ... back to the Midlands and Bilston.

Some Additional comments from Hev

During the last track Gary came up to me and asked when the encore was after going outside for a fag. I unwittingly told him that this was it... nothing seemed suspect.

Unfortunately Gary had missed his opportunity to get Lizzy to ask me a very important question. So, while Lizzy and I were having a drunken boogie after almost everyone had gone he slipped a piece of paper into her hand.

Lizzy dragged me out to the corridor and showed me what the fuss was about.

I can happily say that I said yes to Gary's proposal of marriage. But I did make him promise to ask me again when we were sober... which he did.. and I still said yes!!!

Dates won't be set until after Oz next year... so you don't have to worry about hats for a while 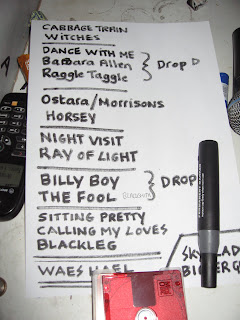 Xmas mini tour ..... 3 dates in 3 days .. its been a long time since I have been on anything this intense, so it was with a mixture of trepidation that I left on Friday mid-day for Derby. For a Friday afternoon the journey up was uneventful, even with a stop at Coventry for a phone conference (the nice thing about these is that they do not need to know where you are ;) ). Pulling into the car park beside the Flowerpot there was even a slot available.

As I loaded the camera gear into the hall, Bob turned up and quickly followed by Sid the sound. Before long BH1 and 2 arrived and the gear was unloaded. This was the first time I was going to hear Lyndon play live .. he had been at Saul to record the sound for the Live DVD .. So I was looking forward to seeing how he would bring all his experience to the BH tunes.

The warm up and sound check chased away any nagging doubts and showed that everyone was comfortable playing together. A couple of the new tunes were used during the sound check and came through with flying colours ... tonight was going to be a blast.

I have videoed at the Flowerpot a number of times now and have a good idea for which camera positions work and what to avoid. Though this time i had a new toy in a little bullet camera. I planned to mount it in a mic. stand to get hight and unobtrusiveness, and record through a camera body. I also had one to look down on the drum kit, which I hoped to allow a wider camera angle.

A quick chance to say hello to Rich, Lynda, and Graham, who were ensconced in prime slots besides the speaker bins row 1. Andy arrived fresh from the dash up after work and that was the cue to get ready, the show would be starting in a few minutes. A quick dash around all the cameras, winding them up before Lizzie led the team into the stage.

The start was as has become normal for the last couple of years, and then we were into new material. The full set list is here, however Dance With Me, The Ride, Raggle Taggle, The Fool, Calling My Loves, and Waes Hael all got an airing. Along with many others I had been listening to the samples on MySpace from the new album - Thirteen Fires - together with the tracks from the summer festivals, and wondered how they would transform to the live stage .... There was no issue - the live arrangements fitted superbly into the set, and Lyndon looked very comfortable as he competently fulfilled the guitarist role, belying the short time he had to learn the set.

There was one incident of mirth - Jay broke his Bass strap about two thirds of the way through. All the crew assumed he was messing around kneeing on the floor, and took a while to help out with a spare one (bit of baller twine and gaff tape). All credit he didn't miss a note!!

As always seems to be the case, the show finished way before I wanted it to, and there was a mad rush to Hev and Gary on the merchandise stall to swap £10 notes into CDs. Quickly clearing the cameras away gave me an opportunity to catch up with a few people before the packing up started. I must mention a very big "Get Well Soon" for Stan who misses the tour after an incident with a tail lift and some ice (what is it with Ice and this band.. Nic had a contretemps with some a few years ago). Mind you Bob stepped up from apprentice to fully fledged technician without visible hitch.

Packing up was real quick - it was freezing outside so not a night to hang around, and soon we were gathering at the local kebab shop for the traditional feast. For some reason we picked up the local eccentric and endured a diatribe whilst disposing of the food - excellent method of serving a doner kebab .. in nan rather than pitta bread. Leaving her behind we tootled off to the accommodation.

As i had to leave early to get the girls, diverting on the way to Winchester, I slept in the van. Comfortable and relatively warm - until, that is, I rolled over and lost the blankets - One way to wake up quickly!