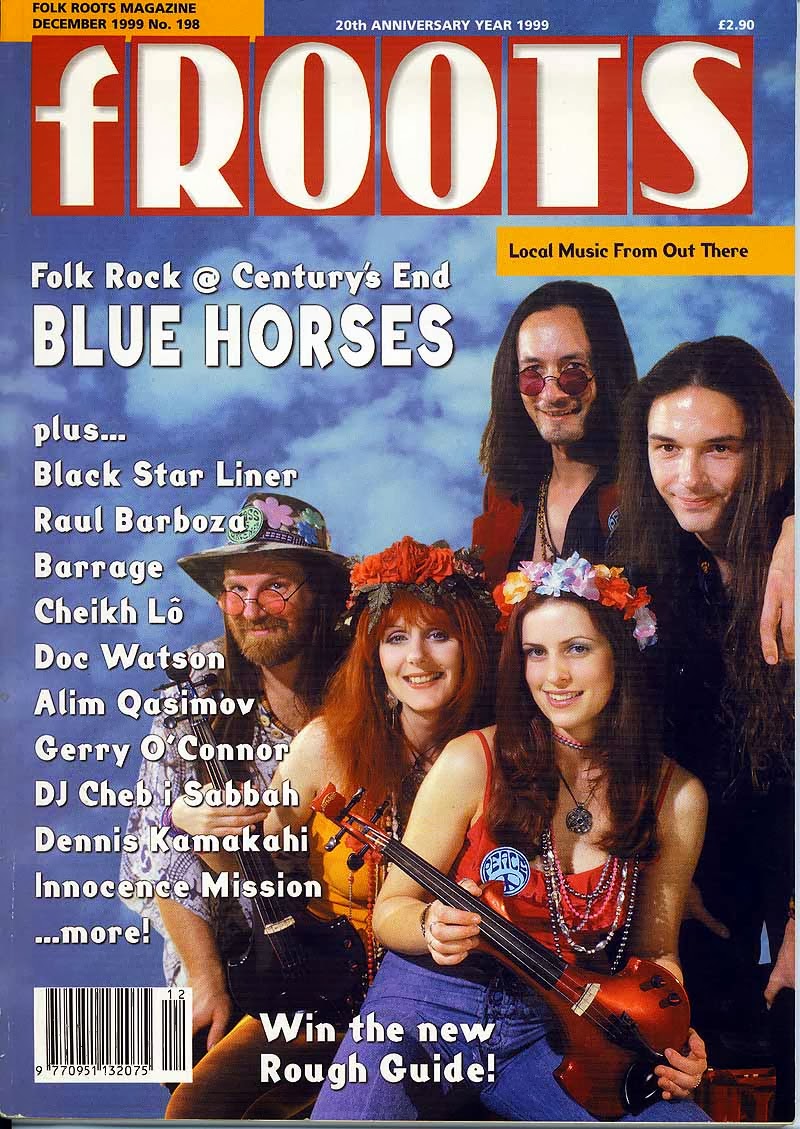 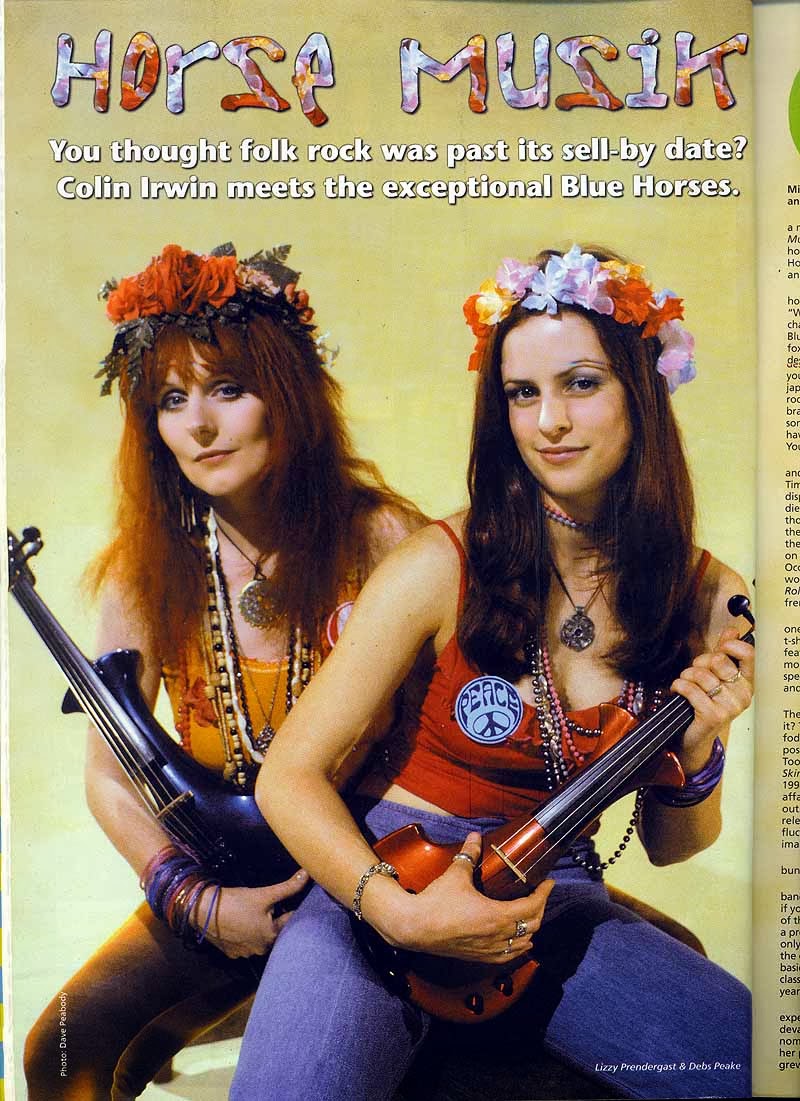 Debs immediately squeaks "I'll sleep anywhere." Debs is from Portsmouth and had been playing classical violin from the age of eight and seemed destined for a classical career. Then she found
herself in the Clwb Ifor Bach one night when Blue Horses were playing. "I'd never seen anything like it. I went up to them at the end and asked Liz if I could have some fiddle lessons off her. I wanted to find something different and not go down the road of college and music college, there wasn't enough in it for me."
This unleashes the pair of them on a diatribe about the iniquities of classical music education and the rigid denial of all freedom of expression.
"There's no passion!" says Liz. "You have to regurgitate everyone else's music and you have to do it in a certain way. You have to stand in a certain way, hold your bow in a certain way and play Bach absolutely as Bach would have played it. It was awful -that's not interpretation, that's learning something parrot fashion. My advice is if you don't want to be a classical musician but want to move into a different area of music then don't go to a conventional music college because it will destroy you. The politics is horrible - all these people wandering around in their Laura Ashley dresses with Vivaldi on their headphones."
"Cliquey then... not like folk music," says Nic dryly.
Liz: "At least there's freedom of expression in folk music. You get handed down the tunes and you interpret them in your own way, that's how it all progresses and evolves. It's word of mouth, not all dotted music which has a crescendo on the 14th bar..."
Debs: "That doesn't mean you forget about technique in folk music but it's a very different technique. When you stop worrying about technique, that's when you can really get into the music. I'm a better player since I've been in the band because it allows you to let go..."
Debs returned to Pompey but went to seethe band whenever she could and stayed in close contact with them. Sod's law was that when Em Grainger handed in her notice, Debs was away in Spain. "I actually put in a call to Carleen Anglim because I knew Debs was out of the country, but Carleen couldn't do it, so when Em got home at Easter I phoned her. i said 'Em's left the band and we're looking for someone to take her place'. She said 'Oh... I don't really know anyone.'
"I said 'We were thinking about you' and there were all these squeals, which 1 took as a yes."
"We didn't want to change the line-up. This idea of two females at the front playing lead fiddles is very much part of the band, but to find somebody who could play to the standard we needed, who was female, looked good and wanted to do it was a bit of a daunting task. We're very lucky to have Debs and she's fitted in perfectly."
It wasn't as if they broke her in gently or anything. Her second gig with Blue Horses was at Glastonbury Festival and she also helped out in the final stages of recording the album.
It's always acutely dangerous to say this sort of thing, of course, but there are clear indications that Blue Horses are ready for a major breakthrough. "A lot of people have said they feel we're on the verge of something," says Nic. "A very high cliff?" says Liz.
If they are or not, Dragons Milk & Coal has certainly breathed life into the whole folk-rock melange that appeared to have withered and died long ago. Fiddles at the front, standard drum and bass at the back, they do perhaps represent the last great yahoo of the folk-rockers of old. Direct lineage can certainly be drawn from the likes of Steeleye and Fairport - despite their protestations that they barely heard these bands until they were firmly ensconced on the road themselves and made a point of listening to those '70s records because so many people kept telling them how much they'd been influenced by them.
"If we didn't have a female vocalist, people wouldn't be making that connection," says Nic. Yet they're also fly enough not to be seen as part of any sort of revival, happy to fly the flag for a 21st Century folk movement but keen to make it an inclusive one, maintaining their contemporary appeal to young rock audiences as well as ageing folkies.
"I don't see anybody in the same sort of field as us at all right now," says Nic, "except maybe the Oysters but they come from a completely different direction to us, they're complete opposites really, and they've been doing it so long they've really established their own thing. We often go to see bands who've been hyped up in the press as cutting edge or whatever, and usually all they're doing is a lot of things we've all seen before. That's fine if people want to see that but there don't seem to be too many people moving things forward. In that sense I do think what we're doing is completely original,"

Dragons Milk & Coal is certainly the most complete album in its field for some time, proving not just their instrumental virtuosity but the quality of their songwriting and a new-found conviction in their own destiny. The album actually opens with Liz playing serene Celtic harp before the band launch into the title track, a song inspired by Lizzy's grandad William Sweetman, who worked down the pit at Abertridwr right up to its closure in the early '70s, It's not a political comment as such, but a social document rooted in the traditional song history. Liz was only seven when her grandad died but the song is an important reference point both for her and for Nic Wauiker, whose father worked underground in the Lancashire mines,
"He went down the pit when he was 14, opening and shutting doors at an age when most kids are just thinking about their 'O'-levels. I grew up with him talking about it and I know he was scarred by it."
The theme is top and tailed on the last track (before the joke secret track!) simply titled Mining Song which depicts the last shift ever at the Abertridwr pit.
Even more striking is In Flanders Field, written by Liz when the band appeared at Dranouter Festival and took time out to go on a trip to the Flanders Fields museum in Ypres. "When we go to places we like going on outings," says Liz. "So we went to Flanders and... it was awful. It pulled no punches and was very, very depressing. They've got one section called No Man's Land and you walk in basically through the front of a bunker and it has a warning outside saying if you are of a nervous disposition don't enter. Inside there are all these sound effects and flashes really really loud and the floor lights up intermittently with these ioud bangs and there's poetry and pictures and the sounds of children crying. When we came out everyone was really quiet. Because we're of a generation that didn't have to go through all that it's easy to become detached from it and not understand what went on, "So I wrote that song following that visit, trying to look at it through the eyes of a Welsh soldier. I imagined him being there dying, thinking of home and talking to his mother. And I put the Wilfred Owen poem Miners on the end of it. It was very, very hard losing it in the studio." 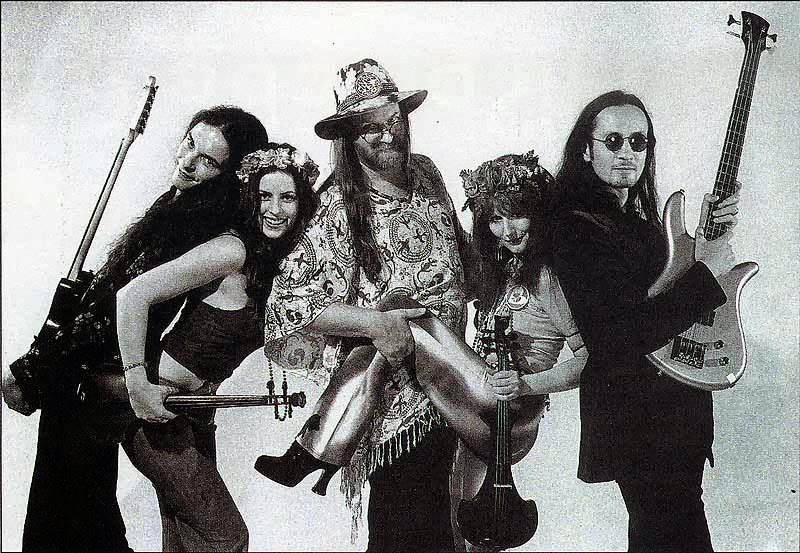 Yet Blue Horses remain outsiders. The folk police still can't stand them - which is, of course, a damn good reason for getting behind them, although it's frustrating to them that they still haven't been accorded the respect they merit given their pedigree and their boundless capacity to entertain on stage. Horror stories about gigs and festival appearances being sabotaged abound, while the specialist press has barely given them the time of day.
"We're supposed to be upstarts," says Nic grimly. "They seem to think we're jumped up and we get accused of being disrespectful. We've overtaken people who've been around longer and they don't like that sort of thing. We've had some very difficult times on the folk scene in Wales, it one major Welsh festival we were : booked to headline on the Saturday night but they made it very difficult for us to perform. When it came to to our turn the thing had overrun by an hour and everyone disappeared and we were left to fend for ourselves. There were members of the public wandering around backstage and everything. And then the power was switched off without any warning,
"Another time I was at a seminar and there were a number of the South Wales folk mafia there and when I asked a question they all started hissing and booing!"
Then there are the mini-skirts. The sight of two fiddle-wielding women giving it some at the front of the stage with loud hair and daring clothes has also created a fair number of frowns and wagging fingers. "We do get accused of being sexist and that's really bizarre," shrugs Nic. "They assume us nasty blokes are manipulating the women, making them stand up there in their mini-skirts."
"Whereas..." says Liz, warming to the topic, "we get a lot of comments from women that it's nice to see women in charge. We have the lead instruments and the band is built around two females with the blokes doing the boring bits at the back. We've got no intentions of ever being The Corrs..."
You must get the odd leering lad having a pot at you though... "No we don't. They are very respectful towards us. They're probably too scared of us! We've never had any hassle on stage at all. The only thing that happened was once a couple of blokes were laying on their backs in front of the stage looking up our skirts. But they were from Cardiff so they didn't count! I made some comment and they got up and shuffled to the back, very embarrassed. I think that if there was any trouble or somebody gave us a hard time, the rest of the audience would pile into them..."
But aren't you fluffy bunnies?
"Don't you believe it."
Links to this post