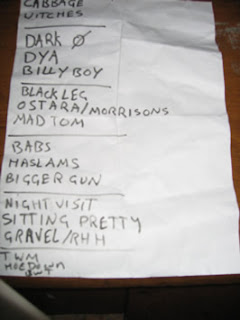 Pictures from the show are available in the photo gallery here

When I saw this first appear on the gig list the chills ran down my spine - A return to haunts long past.. St Mary college was the scene of daring doos and skulduggery in days of yore, when all London colleges partook in the game of mascotry.

Knowing roughly where it was, and getting there were two different things, so a quick consultation of the on-line maps gave some improbable route up through South London, so back to the tried and trust old road atlas, and it seemed obvious ... round the M25 and up through the Blackwall tunnel.

It was an early kick off, so we left home just after Noon, looking to get there early so as to make sure we get a good parking spot, but also to sort out the inevitable problems. We cruised around to the A20 and were through to Eltham before the inevitable jam, squeezed through the tunnel, and before long we were driving down Mile End Road. Next up some where to park, preferably close to the stage door. After driving up and down past the college a couple of times we pulled in to ask at the ticket desk - "Dunno mate - round the back somewhere...". So a bit more exploring on foot and we found the stage door, time to abandon the vehicle on yellow lines.

Inside we soon bumped into Bob and Hev, who had taken the simple route - train, and, for the first time this year, Baz and Rita. After the customary chit chat, leaving the girls to explore the concessionary stalls, Bob and I went off to explore the facilities.... The stage was really part of a big old victorian theatre, with a balcony and stalls out front, big footlights area and a curtained off stage area. Slipping behind the pagan choral society reaching the high notes, we reached the catacombs below desks... the dressing rooms - somewhat akin to a victorian school.

With a hastily drawn map we exited to meet Jay and Rob arriving having taken a detour through Lewisham, but otherwise in one piece. touching base with the other half of the band brought the bad news of a breakdown the other side of the city, something about a fuel grading problem. Discussing options - we still had time to get it fixed and meet the timetable, provided all went well. We just had to wait.

6pm and the van finally arrives, major panic as we assemble back stage, with hardly a time for the pleasantries. Everything gets thrown together, and we are ready for a sound-check ... cant do this until we are clear to go, and that isn't until after the urban drumming has finished .

7pm and as the starter approached the blocks, everything was moved forward into position and an all too brief line check down (this is where all the cables are checked they are plugged in and noise comes out). the gun went off and the band launched into Cabbage Train - the sound crew battled with the balance, until after Witch in Wedlock Lizzie could take no more and a temporary halt was called to sort out the major humming.

After a couple of minutes sorting things out, we were back on track and into Dark Circle, D'Ya, and Billy Boy. The sound crew were still fighting with the balance, but the band soldiered on though Blackleg Minerbefore things started to settle as they got to Ostara, and Barbara Allen.

The rest was a blur, as I moved around between the cameras, and tried to take some stills as well as video - Andy you were missed, apart form all the help - my camera doesn't do fast shutter work well and the hall was too big for the little flash unit.

the session came to a close with Skyclad and Hoedown reels, and the band left the stage. After a little persuasion they came back for an encore of Twmbarlwm.

All too soon it was over, and time to pack up. By 10pm everything was back in the vans and we all went our separate ways, promising to meet up again soon ..
First on the agenda was to find a chippie .. this used to be simple, however the only one on our route had double RED lines outside ... no wonder everyone has moved away from the traditional places - MacDonald's and Burger King have all taken up the pubs around here, with off street parking. An easy run home followed and Cinderella was in bed before 12
Links to this post